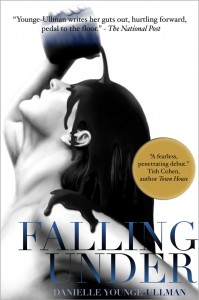 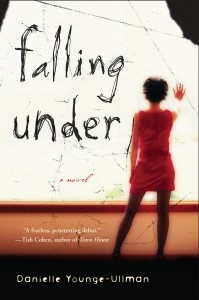 Available at the following retailers
US:
Barnes and Noble
Amazon.com

Gutsy and provocative, FALLING UNDER is the story of a reclusive young artist struggling to connect in a world she doesn’t entirely trust.

Mara Foster is a mess. A rollercoaster of a childhood made a survivor of her, but as an adult she is a mass of contradictions and unrealized potential. Talented, fierce and smart, but burdened by a host of anxieties, Mara finds it difficult to leave the house most days, much less imagine anything resembling normalcy.

Then Mara meets Hugo, and the walls she has built around herself begin to crumble. As she fights for a breakthrough both in her art and in life, she must come to terms with her complicated past, in order to gain a second chance at happiness.

Written in spare, crisp prose and marked by wry humor, FALLING UNDER is a gripping contemporary tale of human frailty, friendship, and hard-earned redemption.

“Let’s cut to the chase: Toronto writer Danielle Younge-Ullman’s Falling Under is one of the most compelling debut novels I have read in a long time. It is gutsy, emotional, sexually charged and, because of its second-person narrative style, unremittingly intense.

Mara Foster is a screwed-up young visual artist living in Toronto. An only child, Mara was severely affected by her parents’ nasty divorce when she was little, and as an adult she tries to carry on relationships with both of them. Her mother, a successful career woman, can’t understand why Mara bothers with her slovenly, alcoholic dad. Mara too often plays parent to her parents rather than the other way around, and the strain is catching up with her. She suffers from agoraphobia (though she keeps denying the term) and other deep-rooted anxieties.

Her relationships with men are equally fraught and she carries a huge burden of guilt . . . and fears she will never be able to have another serious love affair. She has shut down her painting as well as her heart, and has settled for creating safe geometric pieces for furniture stores instead of expressing her emotions on the canvas.

All this changes when she meets Hugo and falls in love with him. The big plot question, of course, is whether Mara will get over her past and be able to enjoy a future with Hugo. How Younge-Ullman handles Mara’s journey is key. The story could have turned into something intolerably trite, especially since Younge-Ullman’s first attempt at a book was, by her own admission, a “chick lit” novel, and there are definitely elements of the genre here. However this is not necessarily to the book’s detriment. Because Younge-Ullman has talent (her experience as an actor and playwright serves her well too), she is able to take from chick lit what she finds useful, and then writes her guts out, hurtling ahead, pedal to the floor. The result is a gripping story, crackling with energy. It is also raw and visceral and passionate, and you get the feeling when you read it that the writer is totally unafraid. The fact that Younge-Ullman can maintain this pace and level of urgency is a major point to her credit, though it might well make some readers uncomfortable.

The other aspect that makes the story credible is Mara’s background, about which the author spends a lot of time filling us in. Without the knowledge of Mara’s history, her present would seem too melodramatic to ring true.

What I admire about this book, aside from its look-you-in-the-eye honesty, is what it says about the creation of art: the artist’s relationship to the work, the work’s relationship to life and (perhaps most significant) the process involved in bridging the two.” ~The National Post of Canada

“Here’s a debut novel that delivers, with a narrator who’s afraid of just about everything except revealing herself on paper — there’s a real element of ‘I shouldn’t be seeing this’ in Younge-Ullman’s work. The story of Mara, a talented painter so beset by her demons and fears that can she can barely leave her house, is set alongside the story of Mara’s childhood, and I got the rare experience of both plunging forward with the story and stepping back to applaud the technical skill and bravery of the execution. Extreme, and extremely well done!” ~Kim Alexander for XM Radio Fiction Nation

And check out more reviews on Goodreads.